If you’re looking for a new TV, all those numbers like 120hz, 60hz, 240hz seem too confusing. All these numbers refers to refresh rate that each television has. 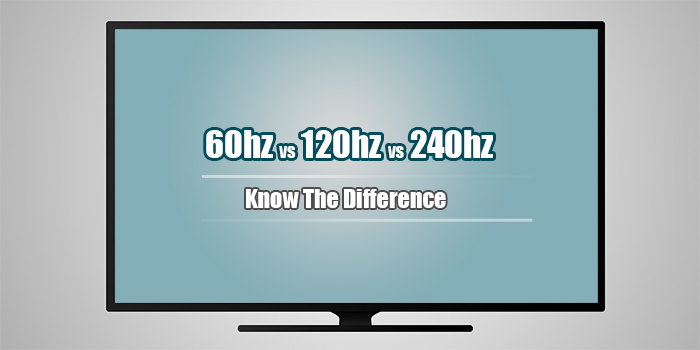 While refresh rate can often be overlooked when shopping for a new TV, figuring out which one you need – 60hz vs 120hz vs 240hz – can guarantee comfortable and enjoyable experience of watching your favorite TV series or sports games.

Refresh rate is the number of frames per second the television can display. While you may see a video on your TV screen moving smoothly, don’t forget that every video is comprised of hundreds of thousands or millions or even billions of still images.

Refresh rate basically ‘glues’ those images to one another to give you smooth, constantly moving video stream. The human eye can’t catch the refreshing of the screen itself, but it can see the result of refresh rate, i.e. smooth video stream.

The human eye can only see the refreshing of the screen when there’s a lost frame or if the video sequence freezes for a few moments, which you’ve probably seen happening hundreds of times when watching a live TV broadcast.

The more often a TV can refresh those images per second, the smoother the viewer will see the video.

If the TV’s refresh rate is inadequate, then viewers see a little motion blur every time fast-moving sequences appear on the screen. That’s why it’s best to check if your TV has an adequate refresh rate during a dynamic sports programming and pay close attention to athletes running or ball moving around on the screen.

The most confusing part about figuring out 60hz vs 120hz vs 240hz is that there’s no definite answer as to which refresh rate is ‘the best’.

That’s because each TV comes with different processing power and each video is different (videos are shot at either 24, 30, or 60 frames per second).

Since a video can be shot at 24, 30, or 60 frames per second, manufacturers tend to increase the refresh rate and use software to create extra frames to fill in those gaps in between the still images.

There are two techniques that are commonly used to create the ‘missing’ frames: duplicating frames, blacking out frames and interpolated frames.

Older TVs are using the technique called ‘duplicating frames’ to refresh the screen. Meaning: TV software duplicates frames to fill in the missing frames to create smooth video for 60hz vs 120hz vs 240hz.

If a video was shot at 30 fps, a TV with the refresh rate of 60Hz would have to show each frame twice before moving on to the next one to fill in the missing frames.

Since the video is constantly moving, the human eye doesn’t normally notice the duplication of the frames.

However, the duplication of frames doesn’t allow to tackle the problem of blurred motion on LCD television, which is why manufactures came up with the blacking out frames technique.

As its name suggests, this technique adds extra black frames in between each pair of frames, but it does it so quick that the human eye doesn’t notice any flickering in the video stream.

If a video was shot at 30 fps, a TV with the refresh rate of 60Hz would have to add an extra black frame in between each pair of the real frames to fill in the blanks.

One can argue that this technique allows to solve the problem of blurred motion on TV, as instead of duplicating frames, the extra frames would be just black, avoiding the slight screen freezing effect.

This refresh rate technique is becoming more and more commonly used in modern TVs. Manufacturers were able to create the interpolated frames technique as HD TVs and 4K TVs are being equipped with much more powerful processors than their predecessors.

It goes without saying that this technique is the most sophisticated one, as it creates a frame or a series of frames to fill in the blanks in between the two back to back frames.

But instead of duplicating or blacking out the frames, it creates new, unique frames by comparing the back to back frames and creating an average of the pixel positions of those two frames.

Thus, if a video was shot at 30 fps, a TV with the refresh rate of 60Hz would have to create one extra frame that would basically be half of the preceding frame and half of the subsequent frame.

While it seems like the perfect solution of the motion blur problem on television, some viewers might not like the overly smoothed look a video with interpolated frames has.